The origin of Sesto must be led back to the pre-Romanic period, as the numerous archeological founds discovered in the territory confirm.
The Roman spirit of Sesto is reaffirmed by its very same place-name: Sesto, in fact, was a statio, that is a post placed at the sixth milestone in the street which connected Concordia Sagittaria with the Norico.
It knew a significant development during the Longobard domination, but then it was submitted by the incursions of a Germanic people called Ungheri. In the Middle Ages it lived a very bright period, with the annexion of the Abbey and of its territories to the feodal control of the Patriarchate of Aquileia, up to the Venetian military invasion of Friuli in 1418. With the Campoformido Treaty in 1797, the Venetian Republic came to an end and in the nineteenth century the territory of Sesto interlaced with the events of the Lombard-Venetian Reign up to the annexion to the Reign of Italy.
The present denomination of Sesto al Reghena dates back to 1867, when Friuli was annected to Italy, and it refers to the Reghena river, which flows through the village. 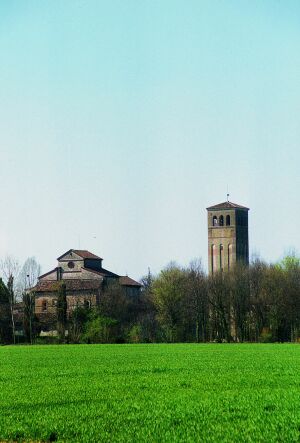 History: S. Maria in Sylvis Abbey (so denominated because once immersed in a wide wood, from Latin "silva") was funded in about the first half of the eighteenth century; in 762 it received the donation of three Longobard noblemen, Erfo, Marco and Anto, to which numerous others followed. In 899 it underwent the devasting invasion of a Germanic people called "Ungheri" that destroyed it almost entirely. However between 960 and 965 the abbot Adalberto II began the work of reconstruction and the Abbey increased its power, not only on a religious but also on a civil plane, so that it assumed the appearance of a medieval castle, with its defensive system formed by towers and moats. With the Diploma of 967 Ottone I gave the Abbey to the Patriarchate of Aquileia. Later on, in 1420, it passed under the domination of the Venetian Republic which delivered it to the secular priests, who did not reside there, in 1441.
After the suppression of the Commendam, the properties and the estates of the Abbey were sold by auction. After various events the religious jurisdiction moved to the Diocese of Concordia (1818) and in 1921 the Holy See acknowledged it the new title of "Abbey". 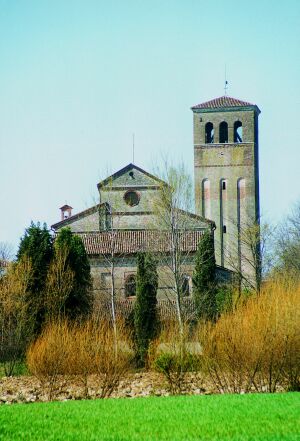